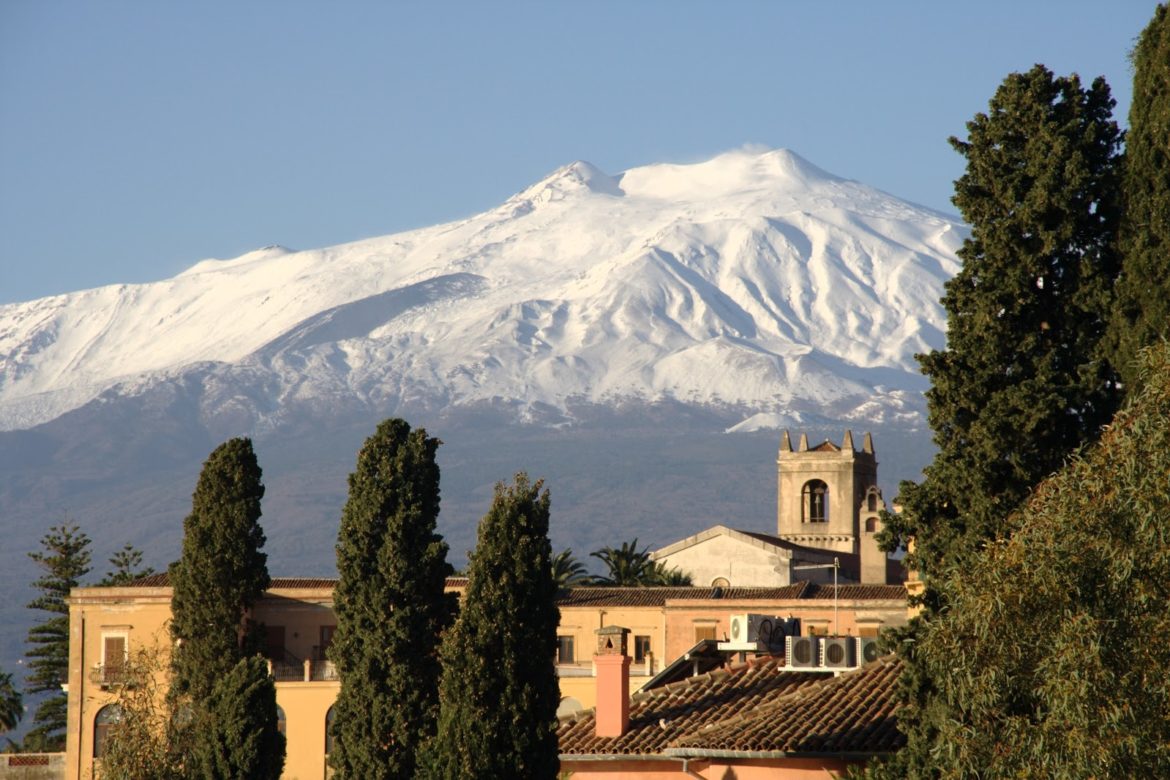 Did you know Italy is home to more UNESCO World Heritage Sites than any other country in the world?

That’s right, Italy pips China to the post with a spectacular 55 UNESCO sites! Already one of the world’s most sought-after countries to travel, Italy’s thousands of years of history and rich cultural development have left a stream of incredible sights waiting to be explored. From the ancient archaeological ruins to the postcard-perfect coastlines and the charming historical centres, Italy will have you picking your jaw up off the floor at every turn.

So, what better way to explore this wonderful country than by way of UNESCO World Heritage Sites? Forget the research, Tripfuser’s Grace Homer has rounded up nine of Italy’s most spectacular UNESCO sites all encased in unique trips that enable you to experience them as few travellers will.

At the foot of Mount Vesuvius, one of the most deadly and fascinating volcanoes in European history, the archaeological site of Pompeii is an ancient city that thrived over 2,000 years ago. During the Roman Empire in the 1st century (eight centuries after Pompeii was founded),  a series of eruptions buried this city under 30 feet of volcanic ash. Remarkably, the city was left undiscovered until the 17th century. Today, you can explore this incredible site which spreads out over 66 hectares and boasts beautiful ancient architecture, sculptures and mosaics which were all wonderfully preserved by the ash.

Founded in the 1st century BC, Verona flourished throughout the 13th to the 18th centuries leaving it with a very well-preserved historic centre full of monuments dating back to antiquity as well as the Medieval and Renaissance periods. Verona is famously the backdrop to Shakespeare’s tale, Romeo & Juliet, so naturally coins the title of one of ‘Italy’s most romantic cities’. As you wander through Verona’s heart, its enchanting squares and winding backstreets, each with a fascinating story to tell, will steal your heart. 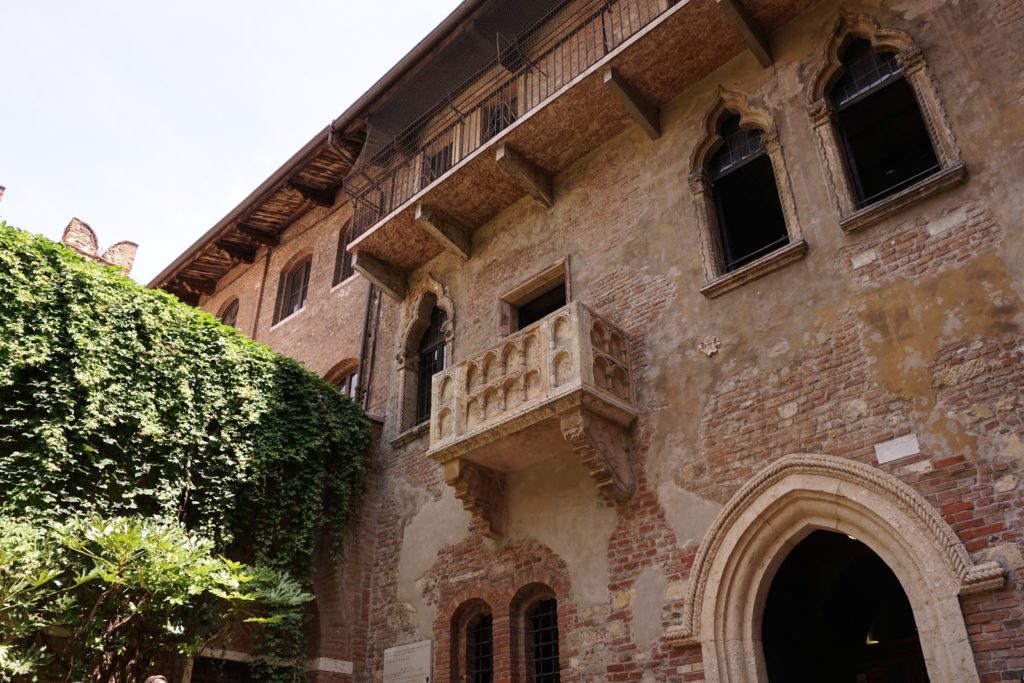 On the northern coast of Sicily, the largest Mediterranean island, the Arab-Norman town of Palermo stands as a testament to the beautiful coexistence of several different cultures in this region throughout history. Boasting two palaces, three churches, the Palermo Cathedral and the cathedrals of Cefalu and Monreale, through its charming architecture this UNESCO-listed region demonstrates the fascinating confluence of the Western, Islamic and Byzantine cultures. 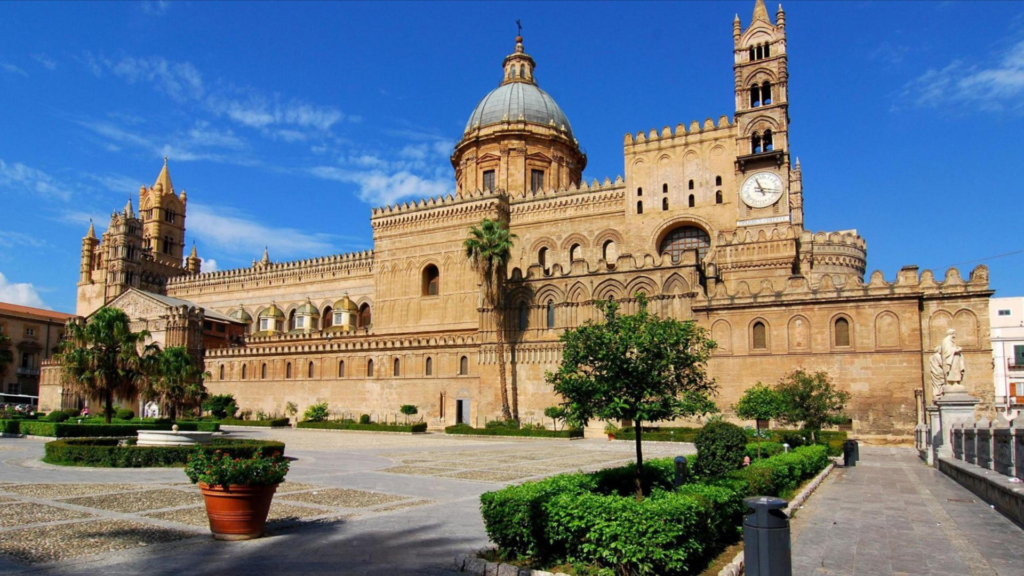 A must-see on any trip to Milan, the Church and Convent of Santa Maria delle Grazie is one of Italy’s finest examples of Renaissance architecture. However, the beauty of this church is not what’s on the outside but what it holds within it: one of the most famous works of art in the world, the ‘The Last Supper’ painted by Leonardo Da Vinci between 1495 and 1497 is housed within the refectory of the convent. Da Vinci’s work heralded a new era of art; laying eyes on this mural is like witnessing history.

Renowned for its beautiful towns scattered between rolling hills of perfectly lined vineyards and olive orchards, Tuscany is somewhere no one should miss. If you only make it to one town, it should be the medieval hill town of San Gimignano encircled by 13th-century walls. A law passed in the 13th century prohibited the demolition of old buildings and therefore preserved this medieval town against radical changes. Sam Gimignano is known as the town of towers as once, 72 huge towers scattered the town, one built by each family to symbolise their wealth. Today, 14 of these beautiful towers still stand. 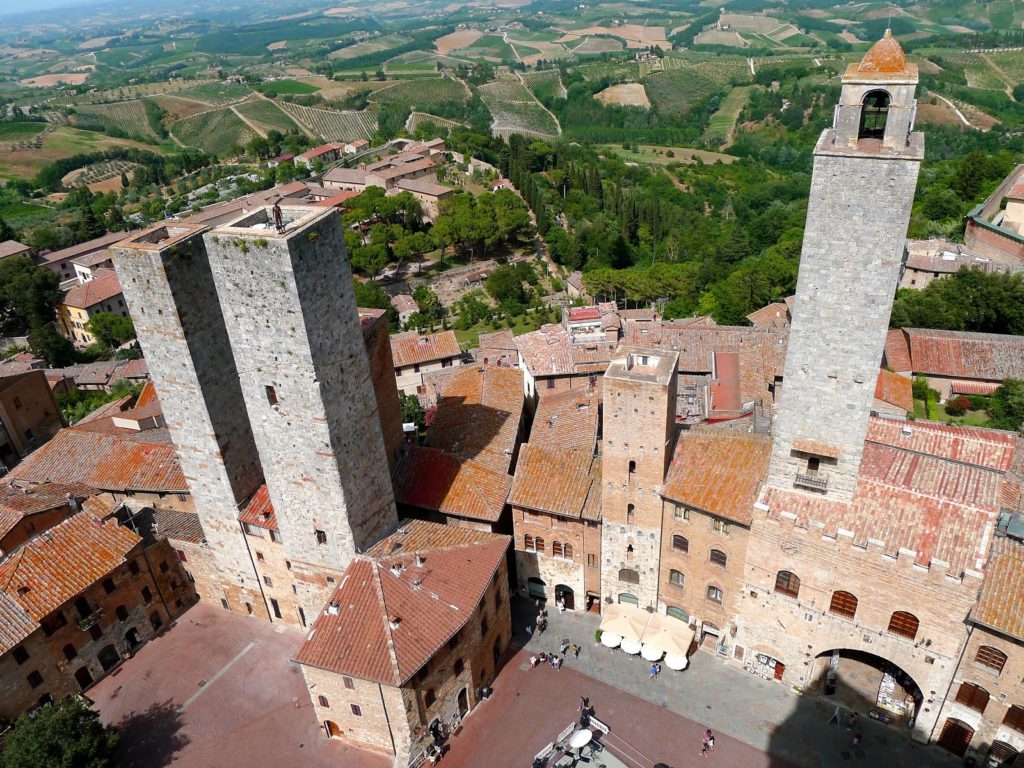 Strung along the charming and rugged coastline of the Italian Riviera, the Cinque Terre is a pocket of old villages. Their streets are flanked with colourful houses, terraced vineyards frame them and local fishing boats buzz about their harbours. The villages that make up the Cinque Terre – Monterosso al Mare, Vernazza, Cornigli, Manarola and Riomaggiore – all date back to the early medieval period and much of this architecture remains today. Wonderful seafood, historical sites and stunning landscapes await you!

7. Sassi di Matera, One of the Most Unique Landscapes in Europe

Nestled in a canyon, Matera is an ancient town formed from a series of grottoes carved into limestone; the neighbourhood is known as Sassi di Matera. Now a beautiful ancient site, the history of Sassi di Matera wasn’t always as pretty. These caves were once the shame of the country as the living conditions inside the caves were extremely poor. In the 1950s, the people living here were moved out of squalor to the ‘new Matera’. This allowed the neighbourhood to be renovated into the pockets of restaurants, hotels and shops now situated inside these ancient cave dwellings. 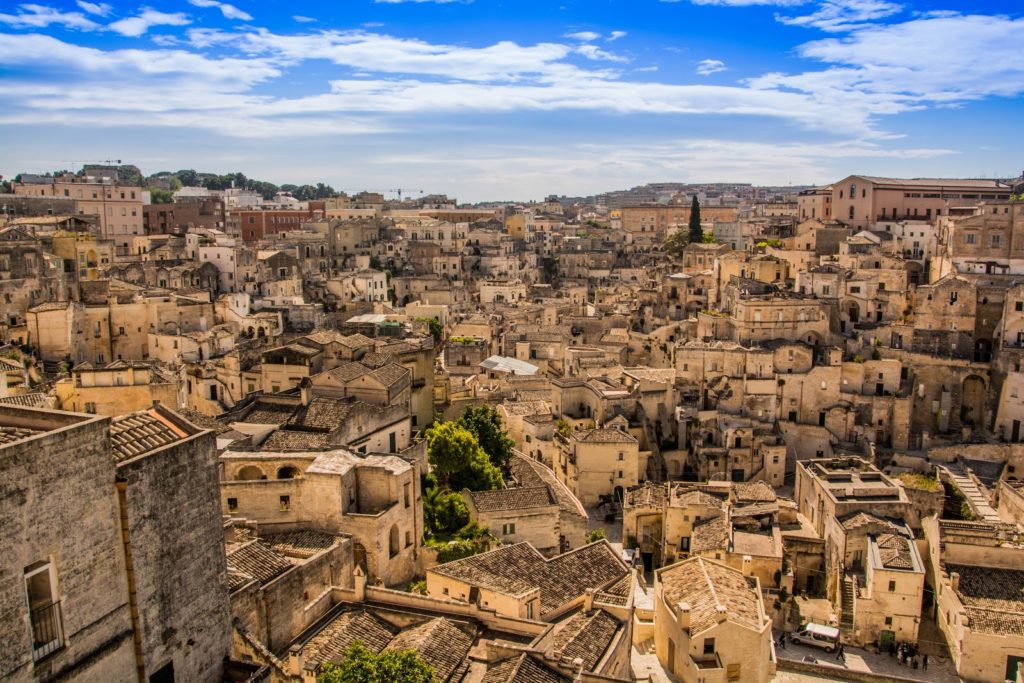 8. Mount Etna, One of the World’s Most Active Volcanoes

At almost three kilometres tall, this imposing volcano stands smoking away on the Mediterranean island of Sicily. Visible from many towns on the eastern side of the island, Mount Etna famously forms an impressive backdrop to the stage of the ancient amphitheatre of Taormina, designed so by the Romans. Whilst it is in a state of continual activity, the volcano is so vast that planned routes to the summit and its impressive crater are designed around its activity: avoiding hot spots whilst still delivering the most incredible views.

9. Trulli of Alberobello, the Fairytale Village of 14th-Century Limestone Dwellings

A truly iconic site, the small Puglian village of Alberobello is famous for its historic centre which is home to the peculiar conically-shaped buildings known as ‘trulli’ (the word ‘trulli’ translates to the Greek word for ‘dome’). These unique structures can be found all over the Puglia region, however, Alberobello boasts the highest concentration of Trulli (over 1,600) and archaeological findings in the village have dated it back to the Bronze Age. A ‘trulli’ remarkable sight, you can wander through the Alberobello’s winding streets flanked by these houses to the viewpoint where you can look over the entire historic centre. 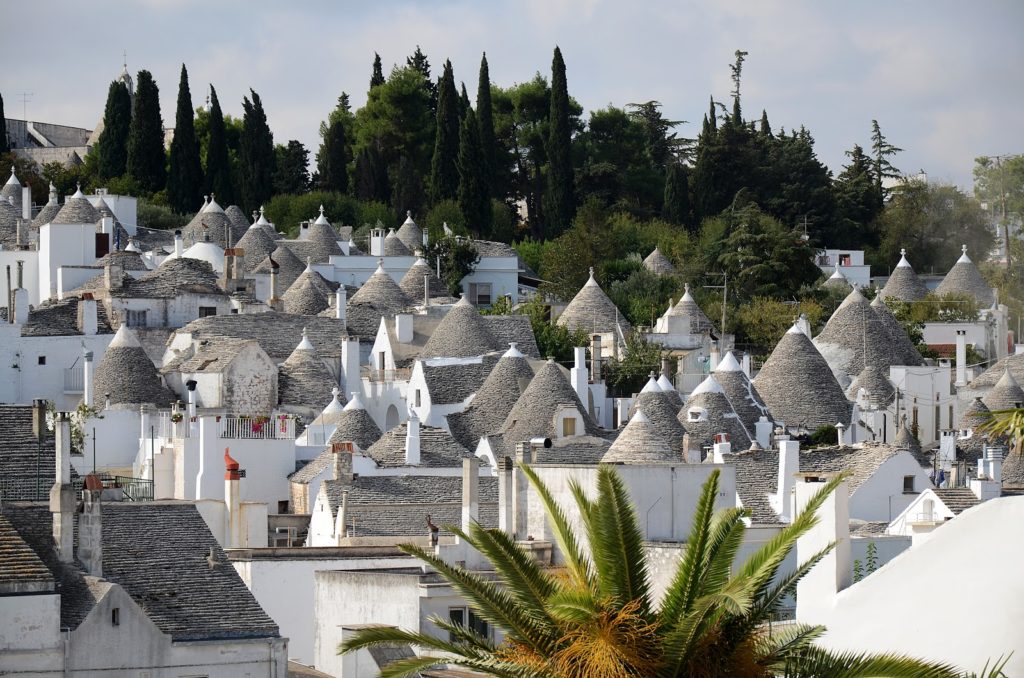 Everyone has heard of Italy’s Amalfi Coast but that doesn’t stop it from being one of the greatest areas of physical beauty and natural diversity in Europe. Inhabited since the early Middle Ages, the Amalfi Coast is scattered with towns of great architectural significance: all wonderful examples of how centuries of communities have adapted to the diverse nature of the terrain along this coastline Stretching 40 kilometres, the Amalfi Coast offers one of the most incredible coastal drives in the world and is not to be missed. 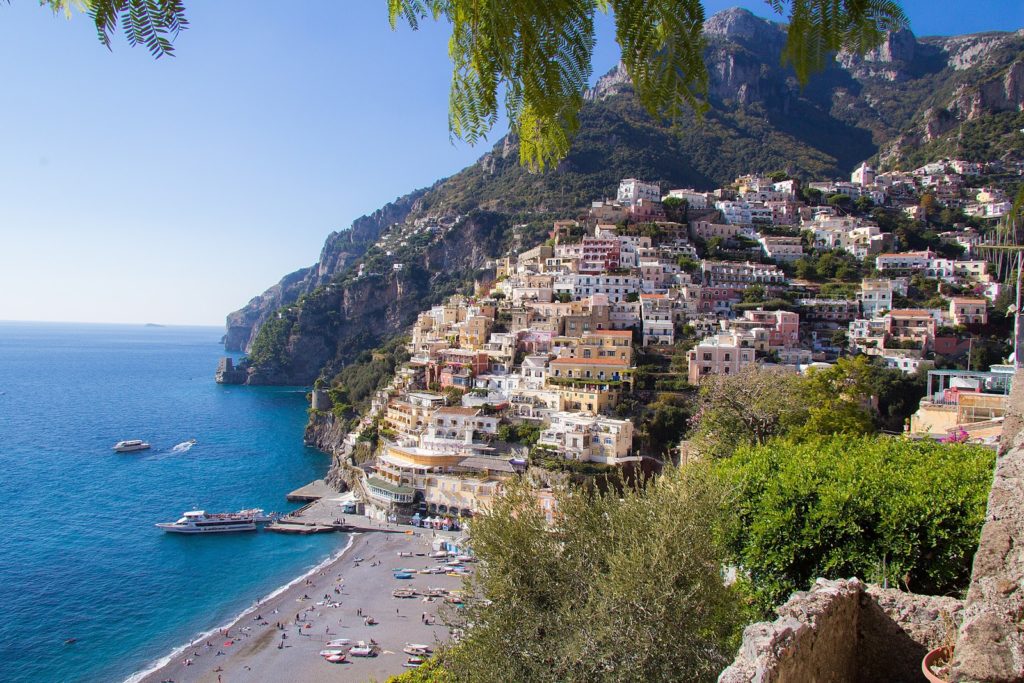 Connect with one of our in-destination Local Agents today to create your very own customised trip to Italy or any one of our other 53 destinations worldwide!

What Teenagers Really Want from Their Next Family Holiday

All You Need to Know About Travelling...

Tour Cambodia with this Guide

A Guide To The Best Food and...

Plan Your New Zealand Tour With This...