10 Foods You Must Try in the Philippines 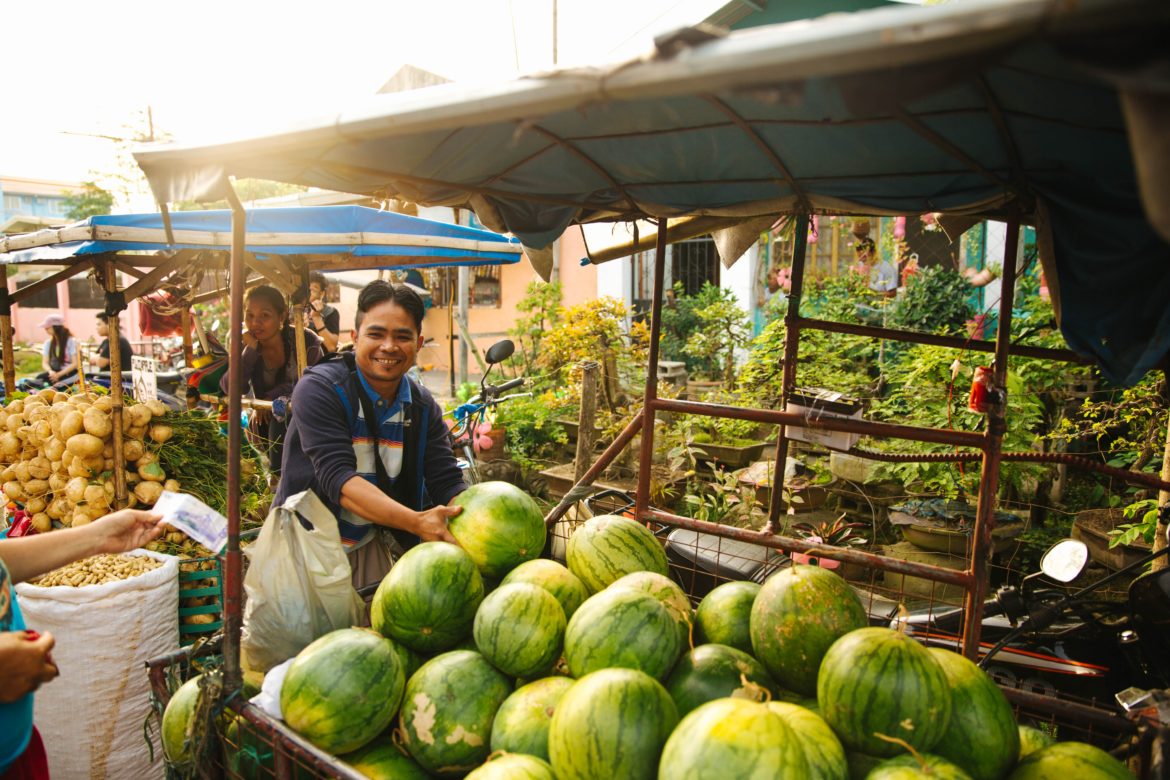 You wouldn’t be mistaken if your current belief was that Filipino cuisine is not something to write home about. Despite being a country of staggering beauty, thousands of pristine islands and some of the friendliest locals you will ever meet, the Philippines has a bad rep when it comes to food. However, that is simply not the case.

From the indulgent adobo to the alarming yet intriguing balut, Filipino fare is surprising, hearty and full of wonderful flavours. Even gastronomic hero, Anthony Bourdain, stated the best pork he ever ate was in the Philippines.

Travelling in this country will open your eyes to a new palette of unique tastes and flavour combinations. Tripfuser’s Grace Homer spent a couple of weeks hitting up various destinations in the Philippines, and as the dedicated foodie she is, here are her top ten food picks you must try on your Philippines trip!

One of the most famous dishes in the Philippines, adobo comes from the Spanish word meaning ‘marinade’. This delicious dish consists of chicken or pork marinated in a mixture of soya sauce and vinegar plus an amalgamation of other herbs and spices which vary with the region in which you have this dish, or the recipe followed.

Adobo is a favourite of every traveller and you’ll likely have any variants of this dish a number of times during your Philippines trip.

Lechon – one of the best Filipino dishes

The gastronomy king himself, Anthony Bourdain, raved about Filipino pork. Another dish that is the result of the Spanish influence, Lechon is a broad term which refers to a suckling pig that has been seasoned, skewered on a pole and roasted. You’ll find Lechon all over the Philippines, but it is particularly famous on the island of Cebu and you may even notice this just from the pure amount of Lechon restaurants here.

Lechon can come in many forms and there is an endless number of ways to serve it after it’s been roasted. A traveller’s favourite is Lechon Kawali, which is crispy fried pork belly served with two unique dipping sauces.

If you order sisig in the Philippines, you’ll hear the sizzling plate before the steamy goodness even arrives at your table. Many a Filipino’s favourite dish, sisig consists of roughly chopped pig’s cheeks, ears and chicken liver all thrown together on a sizzling cast iron plate with onion and chilli. The piece de resistance of pork sisig is when a raw egg is added at the last minute and cooks in front of you as you mix the dish up. Squeeze the calamansi (a type of lime) over the top and tuck in! 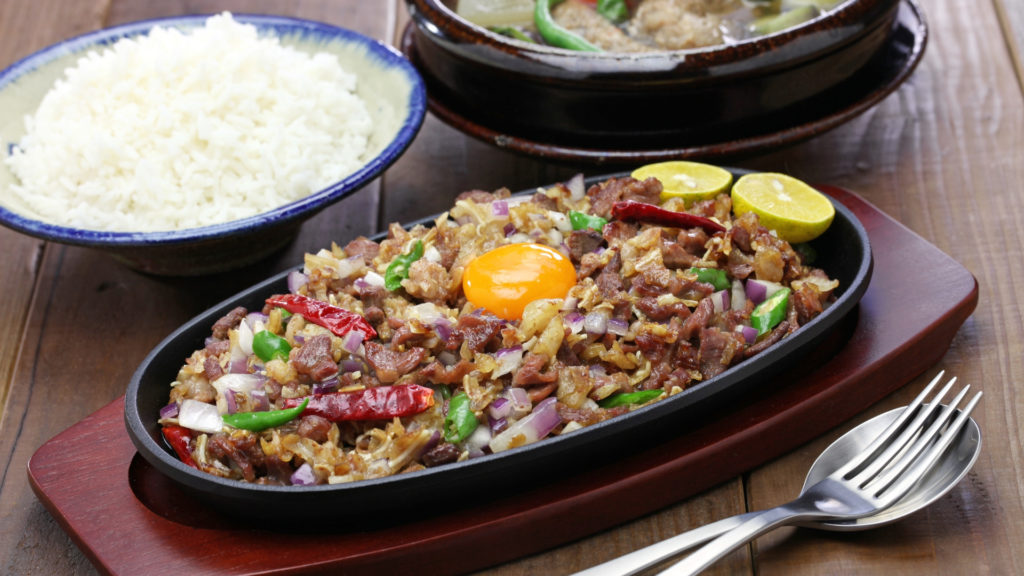 At the end of a long week, you’ll see Filipinos enjoying pork sisig at a local restaurant with a few San Miguel beers. With the Philippines growing in popularity, local people have recognised that not everyone wants to tuck into a pig’s face, so there are plenty of other variations including pork belly, chicken, tuna and eggplant.

Both sweet and savoury in one dish, Sinigang is a traditional Filipino food consisting of a tangy yet delicious broth spiced with tamarind and filled with vegetables and herbs such as spinach, eggplant, tomatoes, onions, ginger and fish sauce. Meat or fish along the lines of pork, beef, fish or shrimp is then usually added to the broth-like stew.

There are many different variations of this dish and depending on where you are in the Philippines, you may have this dish on its own as a soup or as a slightly thicker stew version served with rice. In whatever form you have Sinigang, it’s always mouth wateringly delicious!

Balut is one of the most famous street food snacks in the Philippines. You’re more likely to encounter balut as a dare than as a snack offered to you by locals.

In simple terms, Balut is a boiled duck egg. However, the duck eggs are fertilised and have been allowed to incubate for 14-18 days before being cooked. The result of this process is that when you break open the shell of the egg, there is an embryo filling the space that is well on its way to becoming a duck. Yes, with the odd crunch of a bone or beak, you’ll eat the whole thing mixed with a bit of vinegar, salt and chilli.

Balut is a national delicacy of the Philippines and favoured in various versions across Southeast Asia. If you’re not so keen on chewing bones but want to try balut, you can opt for the 14-day incubated version which is a little less developed than the optimal 17-day version.

Pork Barbecue – a must in the Philippines!

Filipinos love meat, in particular, pork. Whilst pork barbecue is not known as a national dish, its popularity and deliciousness would have you think otherwise. Found in dedicated barbecue restaurants across the Philippines, the dish consists of marinated pieces of pork skewered onto bamboo sticks and grilled over charcoal. 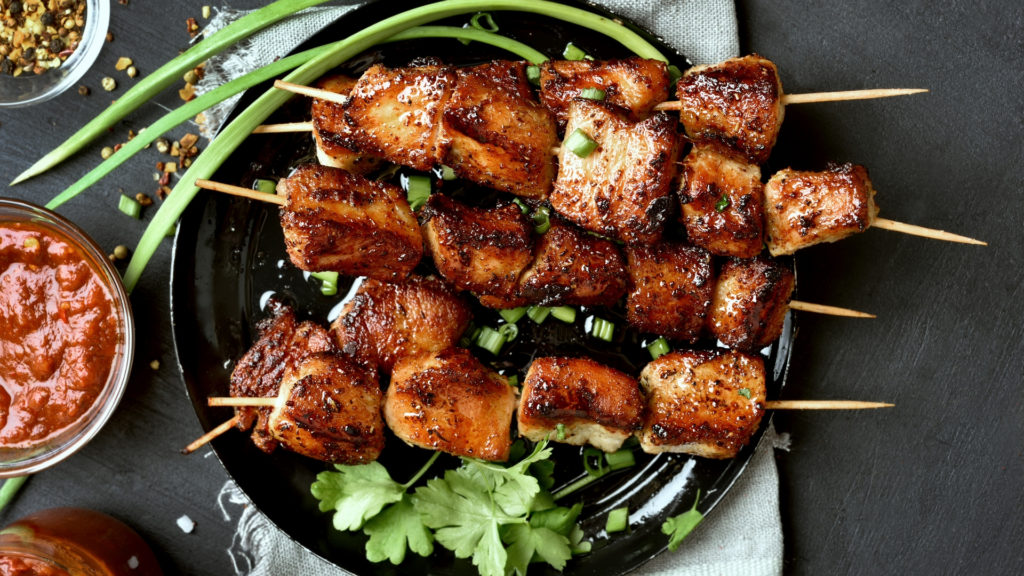 Similar to Indonesian or Malaysian satay, pork barbecue is a staple at parties and a go-to snack for Filipinos between meals. When on a trip in the Philippines, there’s nothing quite like wandering down the street with a grumbling belly and spotting roasting pork skewers at a street vendor for PHP15 ($0.30) a pop!

Silog – the heart of Filipino breakfast

Silog is the umbrella term used for a group of dishes in the Philippines. These dishes consist of meat, garlic fried rice and egg and are a Filipino go-to for breakfast. Each dish name varies slightly depending on the meat that is served with the egg and rice: for beef, its tapsilog; for pork, it’s tocilog; and for Filipino sausages, it’s longsilog.

Whilst silog is typically associated with a hearty breakfast, it can be enjoyed throughout the day.

Perhaps one of the most popular dishes amongst travellers for its simplicity and availability, pancit consists of sauteed noodles with a mixture of sliced vegetables and meat cooked in a broth with soy sauce and fish sauce. 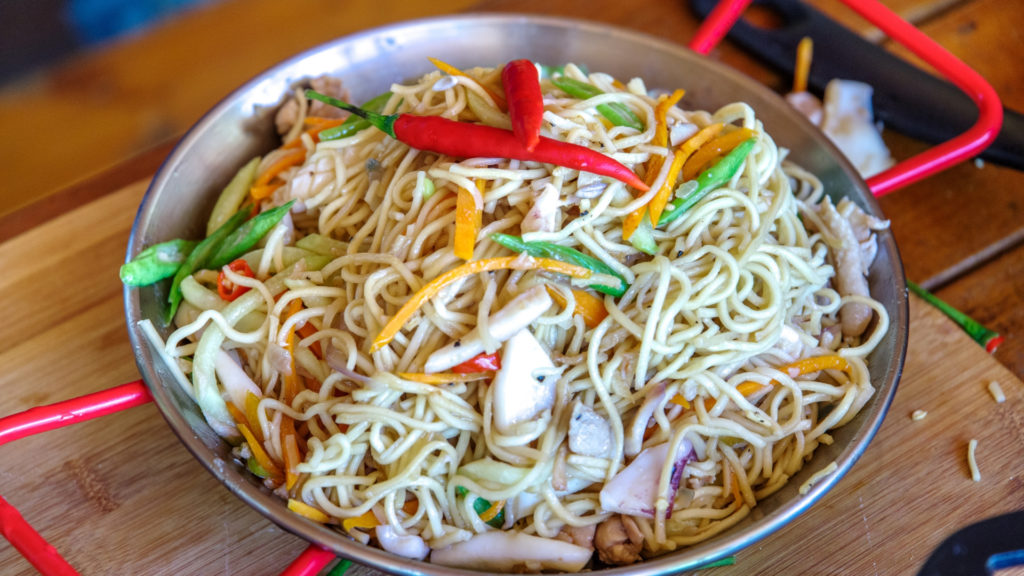 Influenced by Chinese cuisine, the name ‘pancit‘ originated from the term ‘pian e sit‘ which means ‘something conveniently cooked’. Whilst it may be simple and easy to prepare, it is full of flavour.

The terms arroz caldo and lugaw are used interchangeably to describe the same dish. Bought into the country under the Spanish and Chinese influences, arroz caldo is a congee-like rice soup. It usually consists of chicken porridge stewed in a broth with chives, ginger, garlic, onion and saffron.

Interestingly, arroz caldo is one of the healthier dishes in the Philippines; its ingredients have a soothing effect on your stomach and offer numerous health benefits. Whether you have arroz caldo to soothe your tummy or to warm you up nicely in the morning, there’s not much better than a warm bowl of goodness!

The famous Filipino dessert, Halo Halo means ‘mixed together’ in the Philippines. Served in a tall glass, Halo Halo pretty much is a ‘fridge dessert’, meaning whatever sweet treats the restaurant has in their fridge, they’ll add it to this dessert. 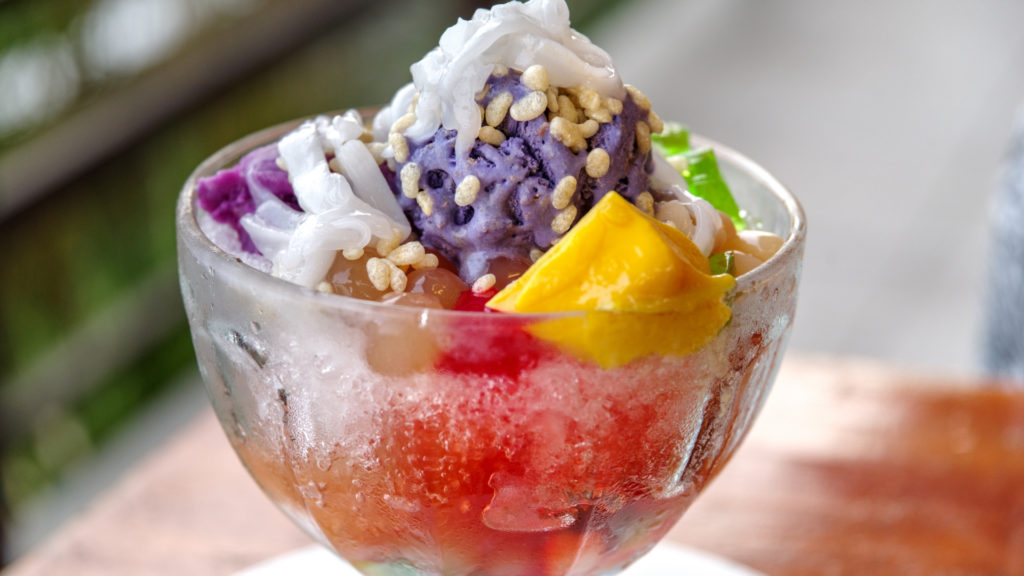 The base of the dessert is ice shavings and evaporated milk, topped with an amalgamation of sweet goodies: fruits such as lychee or mango, sweetened boiled kidney beans, chickpeas, sugar palm fruit, jackfruit, tapioca, sweet potato, sweet beans, coconut gel, ice cream, guava paste, purple yam and so much more.

Is the Philippines worth visiting as a vegetarian or vegan?

Ultimately, yes. No one should miss out on the staggering natural beauty that covers the 7,641 islands in this incredible archipelago. However, the Filipinos are meat and fish lovers as this article demonstrates, so the food is not likely to be the highlight of your Philippines trip.

But fear not, you’ll still be able to find dishes or restaurants to accommodate your requirements. The locals speak fantastic English, so it is relatively easy to communicate your adaptations to dishes and as the country grows in popularity, more and more restaurants are accommodating vegetarian and vegan palettes.

So, ready to try all of this delicious food in the Philippines?

Deciding on where to go in the Philippines can be both a joy and a chore. With over 7,600 islands to choose from, how do you decide where to go?

Take the stress out of planning these trips and allow one of our Local Suppliers in the Philippines to create the perfect adventure for you and your travel companions which suit your budget and travelling style. These in-destination experts know the country like the back of their hand and are eager to fill your trip with unique local experiences, culturally-rich activities and off-the-beaten-path adventures whilst tying in all the must-see spots!

Browse our fully-customisable trips in our Philippines Trip Gallery here and get inspired to create your very own, fully-bespoke trip to the Philippines!

Six Unique Cultural Experiences You Must Have in Mexico

Where to Discover a Different Thailand

The Greece Travel Guide That Will Have...

The Vietnam Food Tour that Foodies Will...

A Guide To The Best Food and...

Plan the Perfect Tour with This Sri...

The Croatia Travel Guide That Will Have...